The new trailer for Paramount Pictures’ highly awaited raunchy comedy Baywatch, the big-screen adaptation of the iconic beach lifeguard show of the ’90s, is now online and may be viewed below.

Baywatch follows devoted lifeguard Mitch Buchannon (Johnson) as he butts heads with a brash new recruit (Efron). Together, they uncover a local criminal plot that threatens the future of the Bay.

“Baywatch” is distributed in the Philippines by United International Pictures through Columbia Pictures.

What happens when you team up a former X-Games star with a busted-up body and a painkiller habit, and an over-sexed undercover Fed with too much confidence, give them each a badge and a bike and set them loose on the sun-baked highways of Southern California?

More to the point, if you’re writer/director Dax Shepard, you deliver CHIPS, a buddy cop comedy loaded with enough action, stunts and hard-R humor to push it to the legal limit.

Shepard also stars as Jon, opposite Michael Peña as his partner, Ponch. “This is about two very different guys with vastly different agendas and skill sets, who have to learn how to ride together, pick up the slack for each other and ultimately trust each other with their lives,” Shepard says. And if that sounds a little high-minded, “It also has nudity—though granted, mostly of me—and epic chases, destruction, and explosions. I don’t think we went more than three days on this movie without blowing something up. The action is real, the jumps are real and the fights are almost real.”

In the film, Jon Baker (Shepard) and Frank “Ponch” Poncherello (Peña) have just joined the California Highway Patrol (CHP) in Los Angeles but for very different reasons. Baker is a beaten up pro motorbiker trying to put his life and marriage back together. Poncherello is a cocky undercover Federal agent investigating a multi-million dollar heist that may be an inside job—inside the CHP. 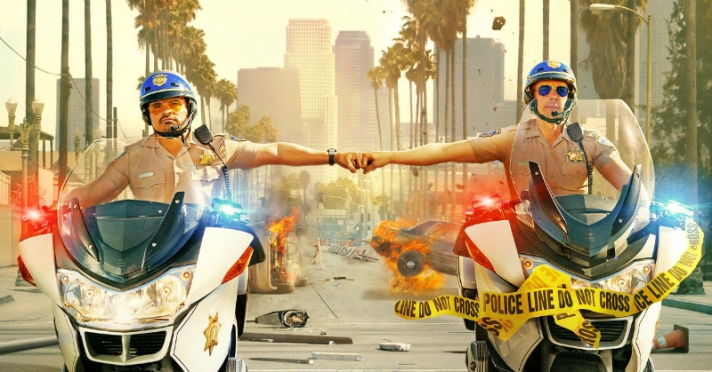 The inexperienced rookie and hardened pro are teamed together, but clash more than click, so kickstarting a partnership is easier said than done. But with Baker’s bike skills combined with Ponch’s street savvy it might just work…if they don’t drive each other crazy along the way.

Producer Andrew Panay, who collaborated with Shepard on the 2012 romantic action comedy Hit & Run, signed up for the ride as soon as he read the script. “It’s incredibly funny, and wall-to-wall action,” he says. “The comedy is edgy and the action is a little throwback because it’s not a lot of visual effects. We did most of the stunts in-camera, and Dax does a lot of his own stunts, so it feels authentic.”

“I can think of a lot of movies that are funny but I don’t remember the action, or it was just background,” says Peña. “This is obviously a comedy, but Dax wanted the jokes and the stunts to work together so when we transition into the action sequences there’s validity to it. He really gets the setups and the payoffs and how to break down the characters so people can relate.”

A running joke in the film, Jon’s touchy-feely observations contrast with Ponch’s more down-and-dirty commentary, like the way he has to enlighten his out-of-circulation partner on the current sexual scene—namely certain back door maneuvers Jon had no idea had gone mainstream.

Either way, what it boils down to is them being themselves. And being guys. “Ponch and Jon come from opposite directions on so many things,” says producer Ravi Mehta. “Not only tight-lipped versus TMI, but Jon’s a stickler for the rules and Ponch likes to fly by the seat of his pants, so they start out not clicking at all. But once they’re through fighting it, and let their guards down, they actually feed off of how different they are. That’s when it becomes more of a bromance and a true partnership.”

Based on the unendingly popular legend of the Mighty Morphin Power Rangers comes the rollicking, action-packed modern chronicle of how the famed color-coded crew of teen warriors first transformed from a band of small-town outcasts into a united team of mighty superheroes in the new “Power Rangers” movie.

The re-imagined story of Saban’s “Power Rangers” comes to the screen on a thrilling scale that amps up the, action, effects and creative design. A fresh young cast from around the world joins with Bill Hader, Bryan Cranston and Elizabeth Banks in a non-stop adventure that puts ordinary teens to the test in the most extraordinary situation imaginable: transcending a 21st Century pressure cooker of cyber-bullying, alienation, peer pressures and family issues to become nothing less than the world’s only chance to survive.

“Recent research shows that most of us are born with what is termed as a ‘selfless gene’,” says Matt Suzana, co-writer of the Power Rangers movie. “Daily selfless acts include donating blood, helping blind people cross the street, giving alms, and the list goes on.” he continues. “These selfless people share a common gene variation that is linked to the receptor for Oxytocin, often referred to as the ‘love hormone.’ Oxytocin plays a vital role in the formulation of social bonds and relationships, impacting a person’s capacity for empathy.”

“With this in mind, we imagined 5 selfless youths chosen to become Power Rangers. We want the characters to be real and believable, and that they are really selfless people in this world who risk their lives, their jobs, and their future to help other people and yet expect nothing in return. In the case of these young people, their heroic acts are truly believable and most of us can identify with them. Standing up for those in need is a selfless way to live, everyone benefits. To exhibit altruism is to elevate our entire species to the next level,” reveals Suzana.

The script honed in on exploring the five Power Rangers as 21st Century high schoolers, each going through his or her own epic coming-of-age battle – and confronting today’s issues of social media, cyber-bullying, peer pressure, family pressure and the uncertain future – all while learning to deal with superhuman strength and a heroic destiny that is thrust upon them without much warning.

Adds screenwriter John Gatins: “We wanted our Power Rangers to reflect more of what teenagers are going through right now – so we married more realism to the original concept. For each of our Rangers, there is something inside they have been wrestling with and trying to overcome.”

Indeed, each Ranger-to-be has hit a form of adolescent rock bottom. Jason, the Red Ranger, is a former football star who inadvertently made a career-ending mistake; Kimberly, the Pink Ranger, is a Queen Bee who fell from grace; Billy, the Blue Ranger, is a super-smart but socially challenged kid who has never been able to make a single real friend; Trini, the Yellow Ranger, is a rebellious loner who never fits in; and Zack, the Black Ranger, is a tough-guy secretly in an even tougher family situation.

It is only when this quintet of outcasts all land together in school detention that fate takes over – and they suddenly find themselves attached to strange, glowing coins that seem to be bringing them inexplicable strength. Now, they have to figure how to control their mysterious abilities even as they face all the emotions and drama of finding their identities… and try to save the world to boot.