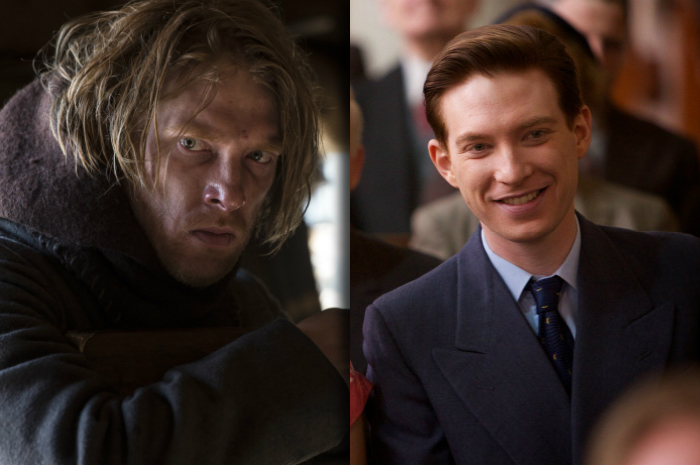 Rapidly rising Irish actor Domhnall Gleeson stars in “The Revenant” and “Brooklyn” – two of this year’s strong Oscar contenders. Gleeson , who has been coming to the fore as one of the most versatile actors of a new generation with roles in “About Time,” “Calvary,” “Unbroken,” “Ex Machina” and in “Star Wars: Episode VII – The Force Awakens” goes from unshaven in his role as Captain Henry in “The Revenant” to all-dapper in “Brooklyn.”

In “The Revenant” by Oscar winner filmmaker Alejandro G. Iñárritu and Leonardo DiCaprio takes on the title role, plays the role of Captain Andrew Henry, a real-life historical figure who was one of the founders of the Rocky Mountain Trading Company and a leader of the expedition up the Missouri River.

Inspired by true events, “The Revenant” is an epic story of survival and transformation on the American frontier. While on an expedition into the uncharted wilderness, legendary explorer Hugh Glass (Leonardo DiCaprio) is brutally mauled by a bear, then abandoned by members of his own hunting team. Alone and near death, Glass refuses to succumb. Driven by sheer will and his love for his Native American wife and son, he undertakes a 200-mile odyssey along with Henry’s (Gleeson) soldiers through the vast and untamed West on the trail of the man who betrayed him: John Fitzgerald (Tom Hardy). What begins as a relentless quest for revenge becomes a heroic saga against all odds towards home and redemption.

For Domhnall Gleeson, playing the role of Fitzgerald’s disappointed Captain, it was thrilling to go up against Hardy as Captain Henry realizes he has been duped. “Tom has brought an edge to Fitzgerald where you never know which way he’s going to go,” Gleeson says. “My character feels beaten down by Fitzgerald, but then he starts to hold his ground – and it was really exciting to go toe-to-toe with Tom.”

Gleeson notes that the script gives Captain Henry a fictionalized arc beyond what history knows of him. “The real Andrew Henry was respected, whereas in this story you see him as an uncertain man learning to be leader. He goes on a journey, growing into the man he was said to be,” he explains. From the start, Gleeson understood the film was going to be a purposefully challenging experience. “Before we even started shooting, Alejandro said he wanted it to be a tough experience for the actors – and he was true to his word. We were put in unusual circumstances and challenging conditions but it was exciting because it was so different,” he comments. “I certainly have never done anything like it before. There’s an exhilaration to making a movie in a way that people just don’t make movies anymore.”

Gleeson says the roughness of the shoot enriched the performances. “My character is meant to find his circumstances horribly difficult, he’s meant to feel out of place and so I poured everything I was experiencing into the performance,” he explains. “You hope that ultimately the size of all that these men contended with — the desperation, the madness and uncertainty — will feel present in the movie theater.”

From the cold and ruthless forest in “The Revenant,” Gleeson dons neatly pressed suits as Jim Farrell in “Brooklyn” where he plays opposite Saoirse Ronan who plays Eilis, an Irish immigrant in America who must choose between two countries, two men and two destinies.

Eilis’ Irish lover, Jim Farrell (Gleeson), had to be both an opposite attraction and a legitimate threat to Eilis’ New York lover, Tony Fiorello (Emory Cohen). Gleeson knew he, too, had to find a subtle but visceral chemistry with Saoirse Ronan, to put the question mark in the audience’s mind. “Life in Brooklyn may offer Eilis more, but it was my job to make Jim seem worth staying in Ireland for,“ he says. “I really wanted to create a connection with Saoirse that you would feel is worth fighting for.”

Like his castmates, Gleeson related to Eilis’ experience in his own way. “I think everybody’s known a sense of displacement at one time or another, of not having a clear home,” he says. “I’ve certainly been familiar with that at various times in my life — and I thought it was captured brilliantly in this story. Then there’s a lot of romance and fun to the story, which is very appealing.”

“Brooklyn” director John Crowley says that Gleeson’s take on the character brought out the bittersweetness of the story. “There’s a consummate intelligence to Domhnall,” says Crowley. “He thinks very deeply about all his roles and he brings an intensity and maturity to Jim that bounces beautifully off of Emory as Tony. It was so important that Jim and Tony occupy vastly different spaces, that they be totally opposite versions of men that Eilis could see herself with – and Emory and Domhnall brought completely different but equally compelling feelings that underline her choice.”

“Brooklyn” opens exclusively at Ayala Malls Cinemas starting January 27, 2016 while “The Revenant” opens February 3, 2016 in theatres (also in IMAX screens) nationwide – both from 20th Century Fox to be distributed by Warner Bros.