She has become one of Hollywood’s fastest-rising stars after landing the coveted role of Anastasia Steele in the box office record-smashing “Fifty Shades of Grey” for which she received a BAFTA Rising Star Award nomination.

Just out of college, Alice is worried she’s missing out—on what, she’s not quite sure, but taking a “break” from longtime boyfriend Josh in order to make sure he’s the one is the right thing to do… isn’t it? 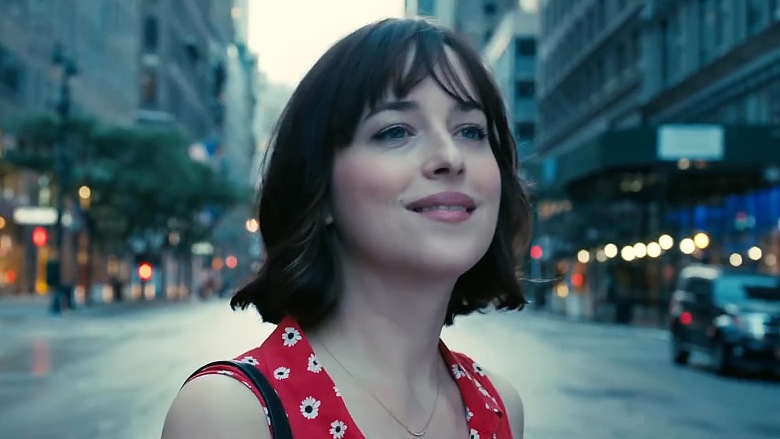 “How to Be Single” takes us along with Alice as she ventures into a new job, a new city—New York—a newly unattached life, and all that goes along with it. Johnson says, “I loved how believable the story was—we’ve all been that person who is stumbling through, trying to figure things out.”

Screenwriter Dana Fox, who worked with Johnson previously, was happy to see the actress go back to a comedic role after several more dramatic parts. “Dakota is just naturally talented, especially when it comes to comedy, both physical and verbal,” she states. “As a writer, it’s such a pleasure for me to work with her again, because nothing comes out feeling ‘written.’”

When we first meet her character, Johnson observes, “She is sort of this doe-eyed, curious young woman starting college. She meets a boy right away and is quickly in a comfortable and nurturing relationship.”

Fast forward four years. “Like so many of us, Alice has always depended on someone, whether it’s her parents, her sister or her boyfriend. Suddenly, she has this profound moment of realization and forces herself into what she thinks is an awakening, but which is really just a break up,” the actress acknowledges. “But taking a break turns into a total explosion of life as she knows it, and now she has to figure out how to handle it.”

After persuading her very serious boyfriend she needs to experiment with being on her own, Alice heads to Manhattan to start a new job as a paralegal. “Right away, she falls into the hands of Robin, who’s kind of insane,” Johnson laughs. “Alice has been sheltered and established a lot of boundaries for herself; Robin has zero boundaries and doesn’t care what anyone else thinks of her, so long as she’s having fun.”

The role of Alice required a convincing amount of girl-next-door naiveté in order for moviegoers to slip into her shoes, or at least remember a time when they did. Director Christian Ditter found Johnson to be “absolutely gorgeous but at the same time completely relatable. She’s talented and gives a very authentic performance, which makes it easy for the audience to see themselves in her place. She grounds the story for all the other characters, who are much more outrageous.”

Opening across the Philippines on Thursday, February 11, 2016, “How to Be Single” is distributed worldwide by Warner Bros. Pictures, a Warner Bros. Entertainment Company.