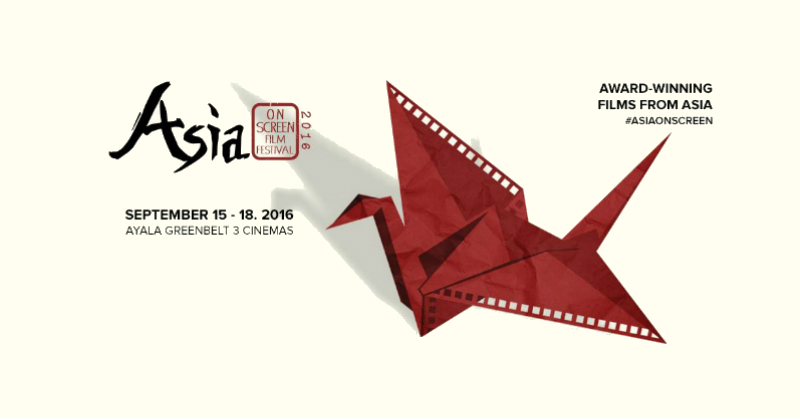 Now on its third year, Asia on Screen Film Festival will run from September 15 to 18, 2016 at the Greenbelt 3 cinemas in Makati City.

This is made possible by Asia Society Philippines and Security Bank, together with Ayala Malls Cinemas and the Film Development Council of the Philippines.

Tickets are now available on-site at the Greenbelt 3 Cinemas or via sureseats.com. Ticket price is 100 PHP per screening. 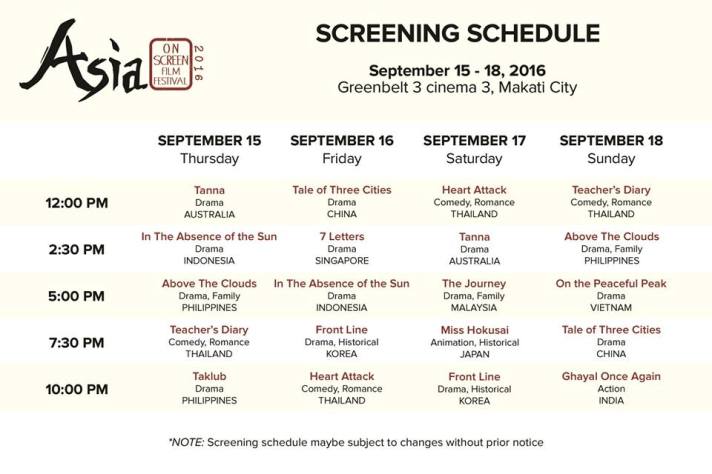 Asia on Screen Film Festival will kick off with a Directors’ Dialogue with Philippine director, Pepe Diokno (Above the Clouds) and Thai director, Nithiwat Tharatorn (Teacher’s Diary). The dialogue will focus on the opportunities and challenges in Southeast Asian film markets, specifically in the Philippines and Thailand, and will delve into the directors’ personal journeys. This free forum will be on September 15, 10AM-12NN at the Asian Institute of Management.

This year, the film fest opens with Above the Clouds. Capturing the breath-taking highlands of the Ifugao region, the film is an emotional journey towards transformation and deliverance.

Other entries explore socio-political topics through significant human experiences. Taklub, a Brillante Mendoza film, documents a family’s struggles from the aftermath of Typhoon Yolanda that ripped through the city of Tacloban. Australia’s multi-award winning film, Tanna, is based on a true story on tribal issues, performed by the people of Yakel in Vanuatu. Korean film, Front Line, narrates the relationship between the North and the South through prisoners of war.

7 Letters represents seven heartfelt ‘love letters’ to Singapore, capturing each of the directors’ personal and poignant connection with the place they call home. The seven stories tell of our heartland and its people through tales of lost love, identity, inter-generational familial bonds and tensions, unlikely neighbors, and even references to traditional folklore.

A 15-year-old boy goes on a hiking trip with his estranged grandfather, and overcomes the grief of losing his parents on a mountain above the clouds.

Ranjit Katiyal, a ruthless Indian businessman, leads a happy and successful life in Kuwait with his family. He has just struck a deal with the Emir of Kuwait. Soon, Iraq invades Kuwait and Ranjit finds himself playing the role of a Rescuer flitting between Kuwait, Iraq and Jordan managing help from wherever it comes, risking his and his family’s life.

Yoon is the busiest 30-year-old freelance graphic designer in Thailand. After staying up working for 5 days straight, strange rashes appears all over his body. He meets Doctor Imm at a public hospital and falls in love with her. Will Doctor Imm be able to diagnose Yoon’s syndrome before his heart condition gets worse?

It’s 1814 and the city of Edo is one of the most populated homes of peasants, samurai, townsmen, merchants, nobles, artists, courtesans, and maybe even supernatural beings. Two residents are the highly accomplished artist Tetsuzo and his talented 23-year-old daughter O-Ei. Tetsuo gains worldwide acclaim as Katsushika Hokusai, but few would know “Miss Hokusai,” the daughter who assisted him uncredited.

On the Peaceful Peak

Film tells story of a traditional ceramic village in Ninh Thuan province. The artist, the lads and girls of Cham minority who have been experienced many ups and downs, realize that they can not live forever in poverty. Yet, along with the changes to develop, they must respect and conserve the cultural quintessence of Cham minority.

After the Super typhoon Haiyan, which changed the city of Tacloban in the Philippines into its horrendous state, the lives of Bebeth, Larry and Erwin intertwine. The survivors are left to search for the dead, while keeping their sanity intact, and protecting what little faith there may be left.

Yuerong is a young widow who is forced to peddle opium in order to support her two little daughters. Daolong is a handsome officer at a river checkpoint. When Daolong becomes the target of both the Nationalists and the Communists, the couple is forced to escape across a country devastated by famine and war.

In a traditional tribal society in the South Pacific, a young girl, Wawa, falls in love with her chief’s grandson, Dain. When an inter tribal war escalates, Wawa is unknowingly betrothed as part of a peace deal. The young lovers run away, refusing her arranged fate. They must choose between their hearts and the future of the tribe.

Song, a former professional wrestler, finds a new job as a teacher at a primary school located on a floating community surrounded by mountains. He discovers a former teacher’s diary and falls in love with the unacquainted writer. Will these two teachers finally meet?

Early in the Korean War in 1950 as the North is rolling through South Korea, South Korean privates Eun-pyo and Soo-hyeok are captured during a battle and brought to North Korean captain Jung-yoon. Afterwards he lets the prisoners go free, so that they can help reconstruct the nation after the war.

Bee comes home to Malaysia after graduating abroad and brings back her foreign fiancé Benji. Her father, Uncle Chuan, vigorously opposed the marriage due to Ben’s frivolous behavior but he failed to change his daughter’s mind. In the end, Uncle Chuan agrees to the marriage with the condition that the wedding adheres to Chinese tradition.