The Goethe-Institut Philippinen presents Berlinale Spotlight film festival from December 2 to 20 with twelve short films from the Berlinale, the Berlin International Film Festival. The screenings will be shown for free in four cities around the Philippines. Dubbed “Berlinale Spotlight”, the films are especially curated for screenings in Southeast Asia and will be shown in two programs.

Berlinale is Germany’s most prestigious film festival and also one of the most important dates on the international film industry’s calendar. In 2015 at its 65th edition, 443 films were shown in different sections. The films shown in the sections Competition and Berlinale Shorts competed for the prestigious Golden and Silver Bears.

Among the festival sections is the Berlinale Shorts which comprises of short films from around the globe. These “shorts” can either be fiction, documentary, experimental or animation. The section aims to showcase new directions in filmmaking that often make first appearances in short films. The shorts in the two programs to be shown in the Philippines focus largely on existentialist reflections, possibilities of artistic expressions and human relationships.

Berlinale Spotlight will be shown in the following venues:

A. Shorts Program 2 – STRANGER THAN PARADISE

The universe in all its infinitude. On planet Sigma, enormous creatures are trapped inside the ice. And then, all of a sudden explosions erupt from subterranean volcanoes. The ice begins to melt; a global warming concludes the giants’ deep slumber and new life begins. The creatures crawl forth, out of the ice. With the aid of slow motion, Seto fictionalises the unfolding of events. Liberated from time and space, she draws ever closer to the proceedings, in extreme close-ups. PLANET Σ is the third part of her planet series. (View the trailer here.)

HOSANNA is an ancient cry of jubilation and entreaty, which according to the New Testament, was used by the crowds greeting Jesus when he rode into Jerusalem on a donkey.
In a remote village in Korea lives a boy with the power to heal. He can resurrect the dead. And that is exactly what he does. Curing people of death, he gives them back life. However, the new life doesn’t cure them, on the contrary. Rejecting the chance proffered by rebirth, the fighting, killing and murder continue. They punish, spit upon and antagonise the boy. Refusing to be deterred, he goes his own way. The boy and the villagers move about in rigorously framed shots, practically devoid of emotion. There is no cry of jubilation. (View the trailer here.)

3. Pebbles at Your Door
Denmark | 2015 | 18 min
Vibeke Bryld
“If we all lived in paradise, there wouldn’t be any tears or separation, no hunger and no waiting, no suffering and no oppression, no war, no death. We’d no longer need hope. We’d lose all those hopes we so dearly love. We Koreans call hope ‘Han’.” (Park Kyong-Ni)
Harmonia lived a happy life in North Korea, until one day in her early twenties when she realised the truth. A truth, she says, that she did not want to accept for many
years: that which surrounds her is a fractured paradise. Late, but not too late she hopes, she sets out on the solitary path into the unknown, to the world beyond the narrow borders of the North Korean regime. She flees via China to South Korea. It takes almost a year before she arrives. She comes too late. But there is no returning. Director Vibeke Bryld uses photographs and postcards to piece together Harmonia’s life. (View the trailer here.)

Desolate landscapes are the protagonists. Sound fragments dictate the direction. The drama could begin at any moment.
During his travels through America’s West, filmmaker John Skoog discovered a new country. In SHADOWLAND, one view of a Californian landscape chases another. Slowly, almost imperceptibly, the landscapes flow into each another. Deserts become forests become water, the street from a car, the river from a boat. Shot on 16mm and in black and white, the montage induces an analogy that recalls the photographs of Ansel Adams and Alfred Stieglitz. SHADOWLAND is a sensual experimental arrangement in which the shift of perceived understanding occurs on a visual and auditory plane. The places visited in the film were once used by Hollywood as substitutes for entirely different locations in the world. The journey is accompanied by a collage of sounds taken from early Hollywood films. (View the trailer here.)

What is reality and what is imagination? Who defines the boundaries? A gifted pianist plays piano. The piano reflects the pianist’s emotion, exploding every dimension. As does the emotion: the man misses his daughter, is no longer allowed to see her. Had the man seen a doctor however, he would most likely have been diagnosed with a psychosis. Would, should, could.
He lives on the street. The mother is worried, as the man who was once her husband sinks ever deeper. What kind of world is this, that puts a smile on his face, while inspiring nothing but fear in her? The daughter has no fear. All that remains is longing.
In Dissonance, reality and fantasy merge, flow into one another. 3D animation and live action become one. An odyssey through time and space. A modern fairytale. (View the trailer here.)

A journey through day and night, night and day. Lilly has been living in Berlin for a while. She is a US American passing through. She has a lover and no penthouse. The relationship is vague. “You come and go as you please”, he says. “What do you mean?”, she asks. “Nothing.”, he says, “I’m happy when you’re here.” – “I’m also happy when I’m here.” Then he plays guitar and she embraces him from behind. Only briefly, then she packs her suitcase. Lilly drifts between worlds and places. Looking for people and connections but remaining in the external. During rehearsals with the performance group Gob Squad, her thoughts and wishes thrive: words become actions. Back at the apartment, a letter from her home awaits her. Matt Porterfield calmly tells of the longing to arrive in quietly composed scenes.(View the trailer here.)

After the catastrophe in Fukushima, a new Japanese word came into being: Genpatsu-Rikon, a word pieced-together from the characters for “atom” and “divorce”. In 2011, documentary filmmaker Christian Bau travels to the east coast of Japan to investigate this newly coined word. What did the filmmaker see? “I saw everything.” -“You didn’t see anything, nothing at all!” (View the trailer here.)

A film crew visits a Syrian refugee camp in Lebanon. The refugees are hiding from the war. The children play hide and seek. The film crew tries to stay in the background; they too are hiding. The theme of El Juego del Escondite is composed of the synergies of reality, fiction and the filming process itself. Contradictions arise when disparate worlds collide at the same time and place.
According to theory, reality is an occurrence from which only particular truths are extracted in a film. Thereby, it is expected that a film will sort the events in a particular order of significance. This process destroys reality. Simultaneously, film also wants to be recognized as the only real truth. “As a director I try to observe myself when working, how I behave when the realities of refugees and my own converge. I observe myself, watching how I observe. I feel like a stranger who – also – wants to tell his own story.” (David Muñoz) (View the trailer here.)

A wolf child, a cat, an angel. Young Daewit suffers violence at the hands of his father. He is eventually rescued and able to flee the place of his abuse. He finds refuge with a family of wolves: a foster child in a modern world. Lost, he embarks on a seemingly endless journey, a journey full of riddles and deprivation. He tries to find himself, his identity – amidst the all-encompassing sorrow. At the end, he flies back to the beginning and finds peace in forgiveness. Filmmaker David Jansen found inspiration for the film in the work of Belgian graphic designer and illustrator Frans Masereel. Processing the most diverse emotions in his woodcuts, Frans Masereel developed a noticeably expressionistic style, in which the symbolic and concrete are interwoven. David Jansen transfers that approach to this animated film, in both form and content. Narration meets association and vice versa. (View the trailer here.)

In the beginning there is nature. Landscape footage of the “Five Dragons” in the Yangtze Valley, the third-largest river in the world, a Unesco World Heritage site in the Chinese province of Chóngqìng, is coupled with views of the gigantic city of Chóngqìng, which resembles a juggernaut and dominates the valley.
The beekeeper Shé Zuŏ Bīn performs a traditional rite of spring on one of the rocks. He allows queen bees to be placed on his body who then summon worker bees. By the end, Shé Zuŏ Bīn’s body is entirely covered by bees. In a kind of trance, he stands utterly still. The buzzing of bees dominates all. He trusts the bees completely, and for a moment they lose all that is dangerous, terrifying. They are a protective shield. (View the trailer here.)

Interior, Night. Matt and Isabel have sex. Their bedroom is sparse. It is silent except for their breathing. Joanna, the flatmate, enters the room and lies down right next to them on their bed. Only briefly noting this interruption, Isabel continues moving on top of Matt, undeterred.
Matt (after a while, without glancing sideways):
“What is she doing here?
Joanna: “I couldn’t sleep.”
Isabel (still having sex) “Were we being too loud?”
Joanna (still lying next to them): “No…”
Bad at Dancing is a chamber piece and a comedy, a sex game. Isabel and Matt are together, Joanna seems to be pursuing Matt and maybe Isabel too. Joanna tries out various approaches to achieve her aim. The three move together, vying for control – dressed and naked. Always introversive. Always direct. Envy and emotion are given a surreal context. The question of borders and their necessity is raised anew. A rickshaw always drives on three wheels. (View the trailer here.)

On the night of 22 July 2014, Matthias Wermke and Mischa Leinkauf hoist two white American flags on the Brooklyn Bridge in New York City. They take the US flags down and fold them in the prescribed orderly fashion.
Poetry or threat? An act of surrender or perhaps art? These were the theories that New York puzzled over last summer. How can one incident be interpreted in so many ways? By means of press reports, Symbolic Threats allows the public at large to express their extreme disparity of interpretation. Inspired by the heated debate over the two flags that suddenly appeared on the towers of the bridge, the film asks what kind of societal scope art has in the present day. What happens when threatened freedom reinstates art with the element of danger? Who or what makes it into a threat? Are we safe in the city? What is next? (View the trailer here.)

Admission to the screenings is free and open to the public. For more information, please visit the Goethe-Institut Philippinen’s website at http://www.goethe.de/manila or write an e-mail to program@manila.goethe.org 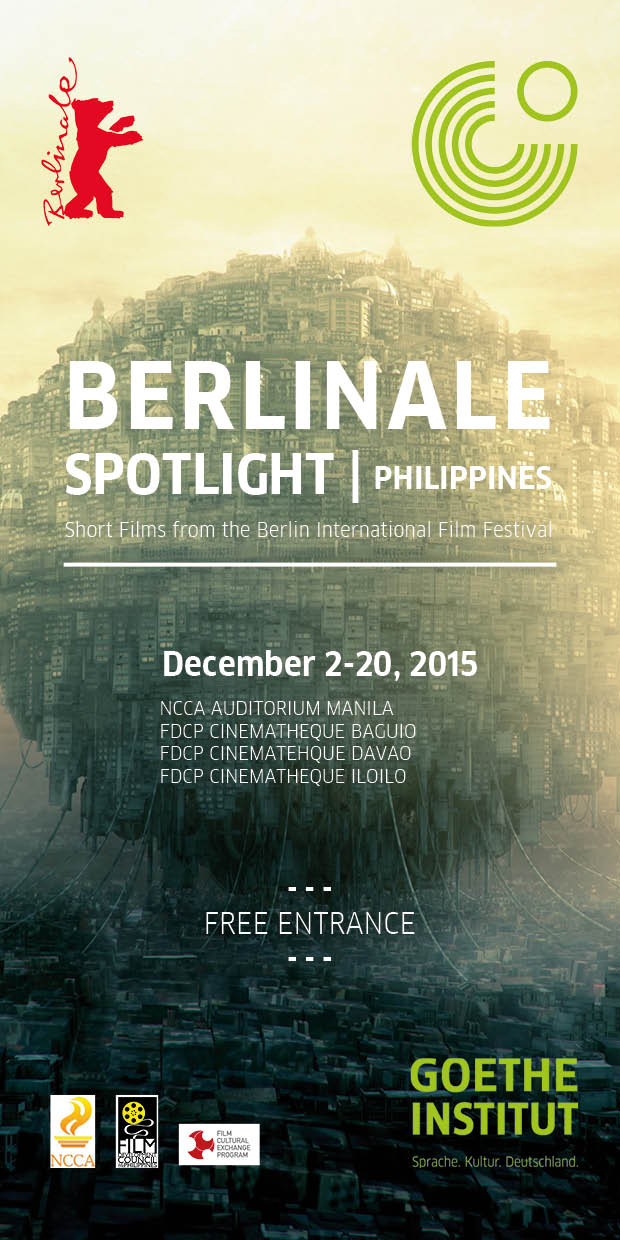