Bob Ong’s “Lumayo Ka Nga Sa Akin” gives the impression that it is self-aware. Those who have not (and did not) read the short novel from which the film is based will not get lost on that note. However, driving along its uneven grounds and humps leads to the idea that everything is just fine since it parodies Filipino movies and television shows. Each flaw can actually be deemed as merely part of the plan–intentional and just as is. But on a closer look, it fails miserably in weaving stories that would have been successfully told were it sure of what to do with itself as a whole.

Running a little later than two hours, Lumayo Ka Nga Sa Akin is divided into three unrelated episodes that respectively inspects the stereotypes of action, horror, and romantic movies and telenovelas. Needless to say, it is mostly enjoyable but it sticks to being uneven all throughout. As a good example of a hit and miss anthology, it is oddly unsure of what to do with itself despite actually being self-aware. 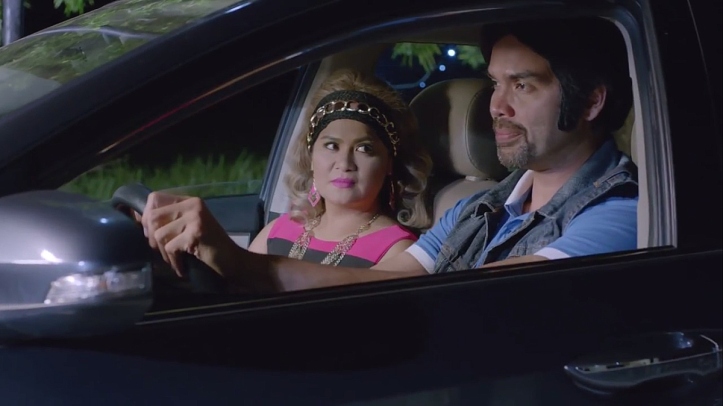 The first episode is “Bala sa Bala, Kamao sa Kamao, Satsat sa Satsat,” directed by Mark Meily. It stars Benjie Paras as Diego, the personification of action hero, and Candy Pangilinan who plays the role of famous actress Divina Tuazon. They look great together up to the point that one would wish they were halves of a loveteam (think of Canjie as a suggestive portmanteau of their names). As a forty-minute section, their episode takes a look at the laughable templates of goons, guns and glamour in the world of commercial action movies. It starts with a bloody massacre, winds up discussing cliches which do not get along its plot, and finishes off with a bloody ridiculous ending. It also stars Bearwin Meily as the reliable sidekick of Benjie Paras (which calls to mind the great ensemble of the now-defunct sitcom Lagot Ka… Isusumbong Kita! where they were a part of), Rez Cortez as Bos and Roxanne Barcelo as Divina’s best friend Joleena Ann Baretto (a curious play of the names of three famous television/movie stars–Jolina Magdangal, Judy Ann Santos and Claudine Barretto).

The second episode entitled “Shake, Shaker, Shakest” is a direct spoof of the largest Filipino horror franchise ever pursued—“Shake, Rattle and Roll.” This is the first time Diamond Star Maricel Soriano (Cora) and Quezon City Mayor Herbert Bautista (Carlos) are paired on the big screen. It follows the adventures of the Catacutan family that gets stranded in a haunted house. Welcomed by an off-tuned singing costumed Pundit (Ryan Eigenmann), they are told to find the cursed object before they could leave the place. They search amidst fright together with their children Aby (Shy Carlos), Mar (Andrew Muhlach) and Samuel (JM Ibañez). While poking fun at the cliches of horror movies, it mostly slips on its own worn out jokes made worse by its consistently loud characters.

The redeeming factor of Lumayo Ka Nga Sa Akin is undeniably the last episode, “Asawa ni Marie” where overused elements of Pinoy soap opera are explored in a funny and engaging fashion. Helmed by Chris Martinez, Episode 3 showcases the entangled love story among poor farm girl Marie (Cristine Reyes), two rich brothers (Jason Gainza as Señorito Lapid and Paolo Ballesteros as Señorito Bogz) who fight over her, and the antagonist Antoinette Taus (Señorita Avila). Playing equally relevant roles are Jackielou Blanco as the matriach Señorita Onor and Joey Paras as Marie’s mother Aling Minda. The most obvious reference of the story is the popular Mexican telenovela Mari Mar which swept the country by storm during its first run in local tubes. Right from the very start, down through that familiar opening billboard and silly confrontations, this episode knows what to do with its story. The only let-down, though, is the final sequence where all the mess have settled in one grand production number.

More than just an anthology filled with sketches that are meant to be funny and entertaining, Lumayo Ka Nga Sa Akin is a relevant presentation of the shockingly bad qualities of mass media that Filipinos continue to patronize. The absurdities of life are indispensable and so is the grueling need to be more thoughtful in the way media feed its audiences.

Not everything shines in this second adaptation of a Bob Ong material, but when it does in most of its engaging scenes, hearty laughs beyond realizations are handily given by the audiences as every one is bound to rediscover themselves as consumers of commercialism as well as the ultimate recipient of all bad jokes.