A search for the truth behind mere surfaces—the subject matter presented to us by director Jun Lana’s 2015 masterpiece, Anino sa Likod ng Buwan (Shadow Behind the Moon).

I had the chance to see the one-shot-one sequence film when it was screened recently at Fully Booked Bonifacio Global City’s U View theater, an event organized by local NGO and Filipino pride movement Yabang Pinoy. It was followed by a masterclass with none other than the director himself Jun Lana who defined his work as a ‘passion project,’ a ‘personal film’ quite opposed to his mainstream cinema and TV endeavors. Hearing the director talk about his own work surely made it easier for me to organize the multitude of thoughts I had about the piece, but still, I find that the more I think about Anino, the more the work becomes profound.

Admittedly I doubted the film would be anything extraordinary, given that at face value it looks nothing more than your artsy ‘indie film,’ complete with a racy film poster and an enigmatic title designed to scare at least 80 percent of the general public—the remaining 20 percent who would see the film would be your run of the mill 20-something hipsters bracing their Murakamis and bubble milk teas. But as its name suggests, there is something behind the surface which makes this film more substantial and worth a watch than that one sketchy film sitting at a dark corner in the cinemas.

The film starts out typically, as how one would expect an indie to start: long take, purposely in low resolution, with handheld shaky shots and hardcoded English subtitles. Then it begins with a premise written white against an ominous black background; it informs us that this film would be about the brutalities in Marag Valley in the 90s, when the clash between the communist movement and the Philippine military would reach a frightening peak. It then presents us with three characters—the only ones to ever appear in the film—Emma, a housewife; Nardo, the husband of Emma; and Joel, a soldier playing the ‘good cop’ role. With these superficial ingredients on hand, it doesn’t require much thought to easily deconstruct the function of each character in the movie: Emma, as the ‘inang bayan’ archetype; Nardo, as the personification of the plight of the poor; and Joel as, obviously, the embodiment of fascism. It is therefore easy to dismiss the film as something predictable, lackluster, and even bland. But hold on for a moment and suspend judgment, because in the case of Anino, there is surely more than meets the eye. 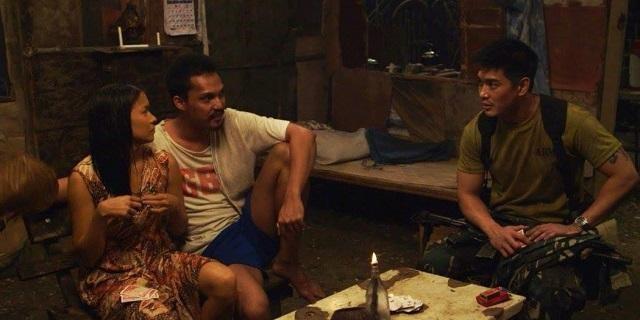 Immediately the narrative takes us to a dense maze of dialogue, at once colloquial, and then suddenly poetic—a joust of words that invites the audience to question the underlying motives of each persona. We witness the writer take his time, letting the words simmer and flavor with meaning, until the undercurrents boil and lay themselves bare. I found that even until the end it was difficult to answer the questions “Who is the hero?” and “Who is the enemy?” because the more the story moves forward, the more I am presented with sides I did not foresee the characters to possess. However, the complexity is not undesirable, it is in fact the strength of the narrative.

The director Jun Lana expressed that the decision to shoot the film in one long take was made due to his desire to engage in unconventional forms of storytelling. But as with every artistic decision, there must be an underlying reason that harmonizes with the central theme of the piece, and in this case, I would say the enterprise to shoot sans Hollywood-style multiple shots blends extremely well with the film’s thesis. A long take coupled with minimal editing would deprive the audience any awareness of other events happening simultaneously; instead, you would only see one side, one aspect that defines what you think of each character presented. Real intentions then, like the dark side of the moon, are hidden.

The film is therefore holistic, abounding in meaning not only with regards to its writing, but also with every aspect of its visual component. As Lana remarked about the expressionistic mise-en-scene, and the intentional boxed aspect ratio of the film, we feel, not only witness, the suffering, the darkness, and the mental torture of the oppressed. I would say its meditative pacing is even comparable to how the great directors of the transcendental genre like Ozu and Tarkovsky format their contemplative masterpieces. Except Anino does not only question supernatural forces, it deals with the immediate and the real.

With his masterpiece Anino sa Likod ng Buwan, Jun Lana invites us to question the truth, to see behind what we can perceive, to witness the other side of a surface we have taken for granted. If given the chance, I would definitely give this film another view, and perhaps I would see another side I did not initially see. Indeed, powerful in meaning and relevance, Anino sa Likod ng Buwan is a triumph for Philippine cinema.