Miko Livelo’s comedy film Blue Bustamante tells the story of OFW George Bustamante’s (Joem Bascon) travails in Japan where he is accompanied by his sleazy friend Roger (Jun Sabayton) in his quest to find the perfect job. Because of a lack of opportunity, eventually George settles for a stuntman job for a children’s TV show Force Five where he plays the hero Blue Force. Or rather, the masked Blue Force, which is the selling point of the film.

What I found impressive about the movie is its lighthearted and yet effective delivery of a socially relevant theme—the plight of the OFWs. It makes use of the ridiculous in order to tell a story of importance in an engaging and humorous fashion. But Blue isn’t only for laughs, it possesses a depth that is at home with the Filipino experience: it is a story about heroism. 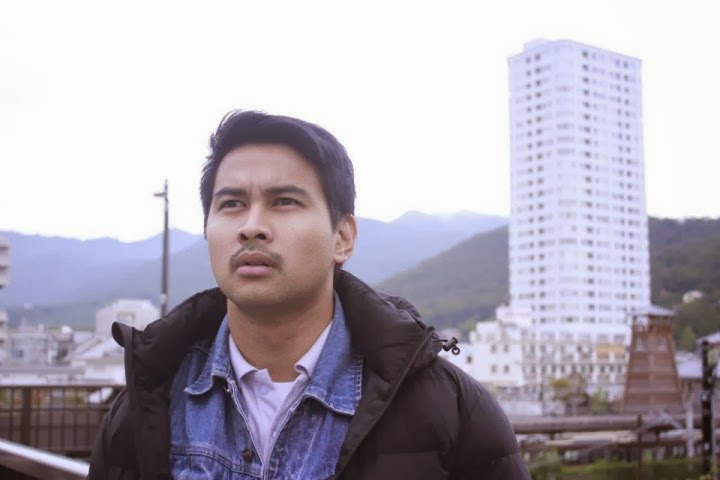 George is a breadwinner: socially conditioned to fend for himself in a foreign land and send money from abroad just so his wife June (Dimples Romana) and son Kiko (Jhiz Deocareza) could live comfortably back home. As his day-to-day episodes with Roger pass, we realize how much of a hero George becomes to his own family, putting their needs first before his own. Notwithstanding the struggle of losing a dignified job as an engineer and being forced to settle for work, which, in his opinion, is so embarrassing that he can’t possibly admit it to his wife, George presses on anyway in the streets of Japan, writing letters to his family whenever he could.

What is more is that the film does not only stop at the familial level, but for me it also comments on the issue of overseas work and the concept of bagong bayani which is essentially tied to the rise of OFWs. In this sense, George becomes a caricature of the modern Filipino family man who must make ends meet far from home. He is therefore a hero on three levels: a hero to his family, a hero to his homeland, and a hero defending the planet Earth from aliens invading the four corners of the television screen. Thematically then, Blue Bustamante does not lack depth.

The writing is also generally good and there is usually a reason to laugh (either that, or the people at the back row of the Cinema ’76 Theater couldn’t stop laughing and so I decided to laugh with them too. But, who cares, it was funny). Having said this, the film’s brand of humor does not insult intellect, and it does not merely resort to sarcasm or cliche slapstick. Character development is also well-done, and one could easily connect with the film’s main characters. One could feel as much as make fun of June’s housewife woes, or Kiko’s little adventures with his friends, or Roger’s peculiar way of making friends with George. It takes some skill to develop characters naturally and make them come alive, and succeeding in that area is a requirement for every good piece of literature.

I would also note how often the film would engage in unrealistic audio and visual effects to make scenes more ridiculous than they would be otherwise—that is of course, in a good way. Like when a scene lapsed into slow-motion in order to emphasize George’s abdomen prowess, or when they choreographed hardcoded subtitles to give the Japanese girl Ayumi’s dialogue a bit more humor, and who could forget that weird guy Saitoooooooohhh…. (Don’t worry, you’ll get it when you watch it).

Also commendable is the production design of the film which is spectacular: the vibrant color palette rich in blues; the hilariously unrealistic props and wardrobe of the fictitious show Force Five; the wisely picked locations in the film; and the iconic and unforgettable way George dresses in all denim. There are many more to cite, but if there’s anything I have an issue with, I’m not sure if the girl Ayumi’s fashion fits the 90s, and the film is supposedly set during that decade. However, this is a superfluous detail, and I mention it here just in case some expert on 90s fashion comes up to me and complains why I didn’t bother to write it in this review. Well here, now I’m safe.

All in all, I liked the film. It’s not a grand movie that you must absolutely watch before you die, but it’s also not a terrible one. It’s funny and entertaining, and would most likely appeal to everyone, not just that one weaboo friend we all have. Okay, it might appeal more to weaboos like, like… me. Joking.

So if ever you do get a chance to see Blue Bustamante, bring your barkada and give it a try. It’s definitely worth a watch, and it might inspire you to learn a bit of Nihonggo. I don’t know why, don’t ask me, but it might.